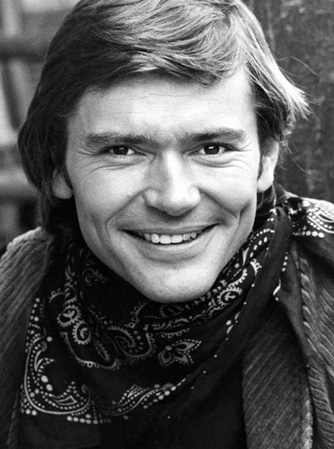 I could search the world over, in every language known to the human race since the beginning of recorded time, and still not find a more appropriate word than “beautiful” to describe the late Peter Ellstrom Deuel, more commonly known as Pete Duel by his own preference. I’m not saying he wasn’t troubled. Or perhaps sarcastic or cynical. Or even volatile and arrogant. Or that he wasn’t difficult to love or too opinionated to like or a mean drunk, or, on the other side of the coin, that he was one of the kindest, most compassionate, affable, truly giving people the world has ever known. Or even that he was all those things or something in between them. I can’t say such things about him along those lines because I never got to meet the man.

But, like I know night follows day, I do know one particular thing about him, the universal, unarguable, objective truth about him: he was beautiful.

It was his dark brown eyes and the look in those eyes; that contagious smile, the easy one that filled his face; his natural-going manner, his cadence, and carefree style; the dimples in his cheeks; the sound of his distinctive voice; his masculine walk. He was handsome and he had presence and he oozed talent and warmth and they seeped to the surface in every character he ever played. He was beautiful.

And all those things inevitably came to the surface and spilled right over the top of the last character he portrayed, the smooth-talking, boyishly charismatic outlaw-turned-law-abiding amnesty hunter, Hannibal Heyes, the former leader of the Devil’s Hole Gang. He was “the other half” of the posse-dodging duo, the Mr. Joshua Smith of Alias Smith and Jones, the one who preferred to talk his way out of trouble, or into it, if the case called for it, rather than fight or shoot his way out—or in. He’d try his charm first, his bite second—and almost always with that smile—and then his fists and his gun last.

And the fall was instant—though, looking back, the Heyes Pete Duel finally gave life and voice to differed considerably from the one we all met in the series’ pilot episode. “I still haven’t found my way in playing Hannibal Heyes,” Pete was reported to have said in an interview. “I know what Heyes should be, at least I did in the pilot.” Pete eventually found his way. But there was that inescapable, immeasurable truth I saw that apparently he couldn’t see: he was beautiful. And I saw it instantly.

Girls my age were excited by the conventionally attractive boys of the time: David Cassidy, Bobby Sherman, Donny Osmond, and others. I was—and it would prove itself over the next fifty years—forever bonded to the dark chocolate brown eyes of that dimple-faced, black-hatted, smooth-talking cowboy, to his masculine voice and disarming smile, to his confident manner and irrepressible warmth. I had, without realizing it then, found my safe haven. I couldn’t know and didn’t know that Pete Duel was in the midst of losing his.

Yet it didn’t stop him from making magic in the form of the incomparable Hannibal Heyes. That guy shone like a beacon in the blackness that was my life. Like most of you, I eagerly waited every Thursday night, to be given a chance, once again, to lay eyes on that silver-tongued, opportunity-grabbing, steady-as-he-goes cowboy. Back in the day, all I had was an audio recorder, but I taped each episode and then played it over and over again, calling on my memory for the pictures; he impressed me so much that I could see every nuance and wink just by listening to the soundtrack. He was alive day-in and day-out right there inside my head. Hannibal Heyes was many things—witty, wise, self-confident, smart—but he was also alive with a sincerity that convinced me, in my naive, sheltered, damaged life, that there was a man ‘out there’ who’d never hurt a young girl like me. Heyes was no child molester, no animal killer, no rapist; he’d go out of his way to keep from hurting others. He wouldn’t abandon someone in their darkest hour.

But who knew how desperate such a dark hour Pete Duel would have? And how alone he must have been that terrible night?

I felt compelled to produce this web site and the books I’ve published about him because little has been written about Pete Duel that didn’t evolve around his tragic passing—entertained by the crass and corny teen magazines and tabloids; or failed to capture what he gave to so many of us—and what he still gives us. You see, we fans have a different perspective. We have the one Pete Duel worked hard to give us—we, the audience: The heart of the man who said, “The greatest pleasure for me as an actor is to please you, and when I do a show and can feel that it gives you pleasure, even if for only a little while, then I can feel like I’ve contributed something for your enjoyment.”

I am sure his family made him happy, his siblings and his parents and all those other relatives, and his girlfriends, buddies and colleagues made him happy, and the animals he shared his life with made him happy, too—or else why did he smile so naturally and so freely and so often? And I like to think that life itself, in its grand ways and in its more subtle liberating moments, made him happy at times, too. I can’t know those things, though I would give anything to know whether Pete Duel was ever really happy. But we do know acting pleased him.

Granted, he wasn’t thrilled about being tied to a television series, and Alias Smith and Jones, in particular, but he did like Hannibal Heyes and he did give him the best he had to give, even when—hindsight shows us—he was literally dying on the inside. He still put his all into his craft, though he didn’t pretend toward the end there, either; that infectious smile was gone those last four episodes. “I find it difficult to keep smiling,” he said in November 1971.

And so we, his fans, see him from that into which he poured most of his heart and soul—right up to the very end of his life: his craft and his passion. For that reason, I wanted to honor him: to tell the story about my love affair with Hannibal Heyes, and my relationship, as it is, with the actor who made him, a man long gone, the one who brought that “sweet-talking, card-playing, and safe-cracking” (his words) charismatic boy to life—because I know if you change some of the words around, the times and the places and the names and the faces, it’s probably your story, too. He was as much your hero as he was mine—or why else would you be reading this?

Remembering Pete Duel, I hope, will be our collective voice, our celebration of his compassion and talent, one small way to honor and remember his life and legacy.

There you have it in a nutshell: My story, the story behind the story. Now let me present to you—through the voices of others—what we know about Pete Duel’s story, about what he gave and what he left behind …

Postscript: The one burning question I had the privilege to ask Geoffrey Deuel about his brother was this: Was Pete ever happy? And the answer was an unequivocal, ”Yes.”

by Tex Maddox; Movie Life, June 1967 "Does he dare enough? That's the sure way to test any fellow! Add up all he tackles, how he proceeds, to discover what he ...
END_OF_DOCUMENT_TOKEN_TO_BE_REPLACED

as told to Marco Amedeo; Movieland and TV Time, February 1967 What makes one letter more appealing to a star than the next? This month Peter Deuel tells what catches his ...
END_OF_DOCUMENT_TOKEN_TO_BE_REPLACED

Rochester Democrat and Chronicle, June 17, 1968 "I don't see why I can't function like anyone else, if I want to, as a political activist, or as an individual who is ...
END_OF_DOCUMENT_TOKEN_TO_BE_REPLACED