as told to Marco Amedeo; Movieland and TV Time, February 1967 What makes one letter more appealing to a star than the next? This month Peter Deuel tells what catches his ...
END_OF_DOCUMENT_TOKEN_TO_BE_REPLACED

Rochester Democrat and Chronicle, June 17, 1968 "I don't see why I can't function like anyone else, if I want to, as a political activist, or as an individual who is ...
END_OF_DOCUMENT_TOKEN_TO_BE_REPLACED

by Felicia Lawrence; Movie World, February 1970 They thought her too big for her britches, and impossible to work with—except one man! The sleek limousine approached the curb and stopped, and quickly ...
END_OF_DOCUMENT_TOKEN_TO_BE_REPLACED

HOLLYWOOD, CA, Dec 31 (UPI) — Peter Duel, a happy-go-lucky actor as the dark-haired Hannibal Hayes in the television series Alias Smith and Jones was found shot to death with his own handgun early today. The coroner’s office said an autopsy showed the cause of death was “consistent with a self-inflicted type of wound.

The body of the square-jawed 31-year-old actor was sprawled on the floor of the living room in his Hollywood Hills home at the foot of a brightly lighted Christmas tree. His girlfriend, Dianne Ray, said she was in another room, heard a shot, and ran to the living room, where she found him dead.

Single Bullet Wound
Duel was shot in the ear by a single bullet which went through his head, police reported. His snub-nosed .32-caliber revolver lay near the body.

Police were called by Miss Ray, 29, who said she had been dating Duel for about a year. Last night, she said, he invited her to his house and they watched his show on the American Broadcasting network. Police reported that Miss Ray told them the actor had said he was despondent, apparently because he felt he had been drinking too much.

Friends Are Puzzled
They said Duel had pleaded guilty to a charge of drunken driving last June 15 as a result of an auto accident on Oct. 24, 1970.

Most of Duel’s friends were shocked and puzzled, Alan Cahan, publicist for Alias Smith and Jones, said, “He was an intense kind of guy. I saw him Christmas and he was excited because a TV movie which he had done for the educational channel was a success. His series had been renewed. He didn’t seem unhappy.”

Duel came from a prominent family in Rochester, N.Y. His father, Dr. Ellsworth Deuel (the correct spelling of the family name), is a third generation medical man. 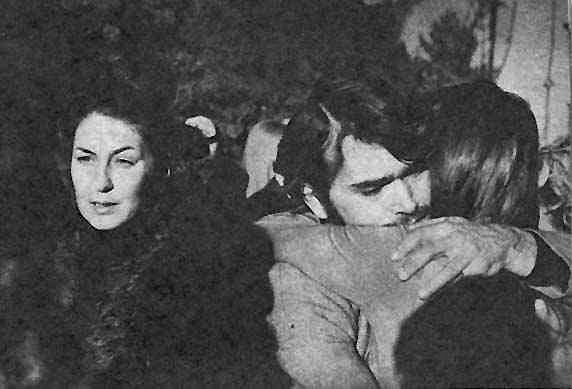 , described as Duel’s girl friend, and Jane Sogher, a friend of Geoffrey.