as told to Marco Amedeo; Movieland and TV Time, February 1967 What makes one letter more appealing to a star than the next? This month Peter Deuel tells what catches his ...
END_OF_DOCUMENT_TOKEN_TO_BE_REPLACED

Rochester Democrat and Chronicle, June 17, 1968 "I don't see why I can't function like anyone else, if I want to, as a political activist, or as an individual who is ...
END_OF_DOCUMENT_TOKEN_TO_BE_REPLACED

by Felicia Lawrence; Movie World, February 1970 They thought her too big for her britches, and impossible to work with—except one man! The sleek limousine approached the curb and stopped, and quickly ...
END_OF_DOCUMENT_TOKEN_TO_BE_REPLACED

On the other hand, Pete Duel, the Joshua Smith of Alias Smith & Jones, voiced a more general sentiment of actors in long-lived TV shows.

“This series, that series, is a big fat drag to an actor who I any interest in his work,” Pete said. “It’s the ultimate trap. You lose any artistic thing you had, utterly destructive. It isn’t the work that tires you, it’s that it’s a dreadful bore that makes you weary, weary.

“Our show is good and I don’t blame its writers and directors, what’s wrong is the whole system. Finish a show one night, start another the next morning with no time between shooting to study the scripts and prepare. At first you’re on guard against sloppy work. After a while you don’t care.”

“TV acting is the worst kind of slavery there is,” Don Adams agreed. “Up early in the morning and working 12 to 14 hours a day. Is that any way to run a life?” 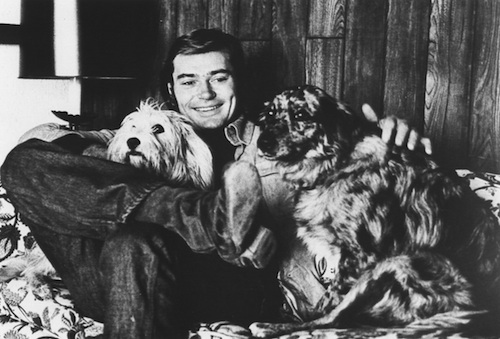 Photo Caption: Pete Duel seems happy at home with his dogs Carol (left) and Shoshone. Only three weeks after this photo was taken, Pete died, apparently of a self-inflicted bullet.