as told to Marco Amedeo; Movieland and TV Time, February 1967 What makes one letter more appealing to a star than the next? This month Peter Deuel tells what catches his ...
END_OF_DOCUMENT_TOKEN_TO_BE_REPLACED

Rochester Democrat and Chronicle, June 17, 1968 "I don't see why I can't function like anyone else, if I want to, as a political activist, or as an individual who is ...
END_OF_DOCUMENT_TOKEN_TO_BE_REPLACED

by Felicia Lawrence; Movie World, February 1970 They thought her too big for her britches, and impossible to work with—except one man! The sleek limousine approached the curb and stopped, and quickly ...
END_OF_DOCUMENT_TOKEN_TO_BE_REPLACED

When Peter Duel went to Hollywood in 1963, he set a goal for himself. He wnated to be a feature film performer of note within five years. He didn’t quite make it. Although he made a few feature films, he still was better known as a television performer. But Duel’s widespread exposure on Alias Smith and Jones might have eventually been the route to a film career for the former Penfield resident. 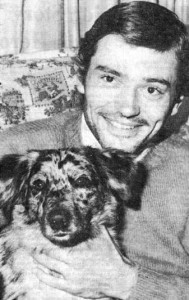 Although he was ambitious as an actor, Duel also liked to discuss other things in talks with reporters.

In an interview at his parents’ home here last year, Duel discussed pollution, which he said was more worth talking about than his career.

“After two or three interviews, talking about pictures and how they’re made and what I do in them and what I’m going to do next, there’s nothing more to say,” he said.

He said, “there isn’t much to smile about anymore,” with air and water pollution, oil-smeared beaches, DDT, over-population, racism, and the deliberate killing off of species.

Duel also said he was concerned because “there was a lot left out of the history books we used in school.” He said that he learned a lot from working on Sen. Eugene McCarthy’s 1968 presidential campaign.

He said that it took him four months to get over “the whole Chicago [convention] thing.”

Duel signed with Ben Cooper’s Celebrity Speakers Bureau on the West Coast to spread his opinions. Among the strongest of his ideas was that over-population is a very real problem.

He maintained that couples should be limited, voluntarily or involuntarily, to one child. Duel used to argue that “the human race is already doomed.”

The only suggestion of his Penfield background which could be seen in his Hollywood apartment was several paintings of hometown scenes by artist J. Erwin Porter, including one of his parents’ century-old home and the church next door.