as told to Marco Amedeo; Movieland and TV Time, February 1967 What makes one letter more appealing to a star than the next? This month Peter Deuel tells what catches his ...
END_OF_DOCUMENT_TOKEN_TO_BE_REPLACED

Rochester Democrat and Chronicle, June 17, 1968 "I don't see why I can't function like anyone else, if I want to, as a political activist, or as an individual who is ...
END_OF_DOCUMENT_TOKEN_TO_BE_REPLACED

by Felicia Lawrence; Movie World, February 1970 They thought her too big for her britches, and impossible to work with—except one man! The sleek limousine approached the curb and stopped, and quickly ...
END_OF_DOCUMENT_TOKEN_TO_BE_REPLACED 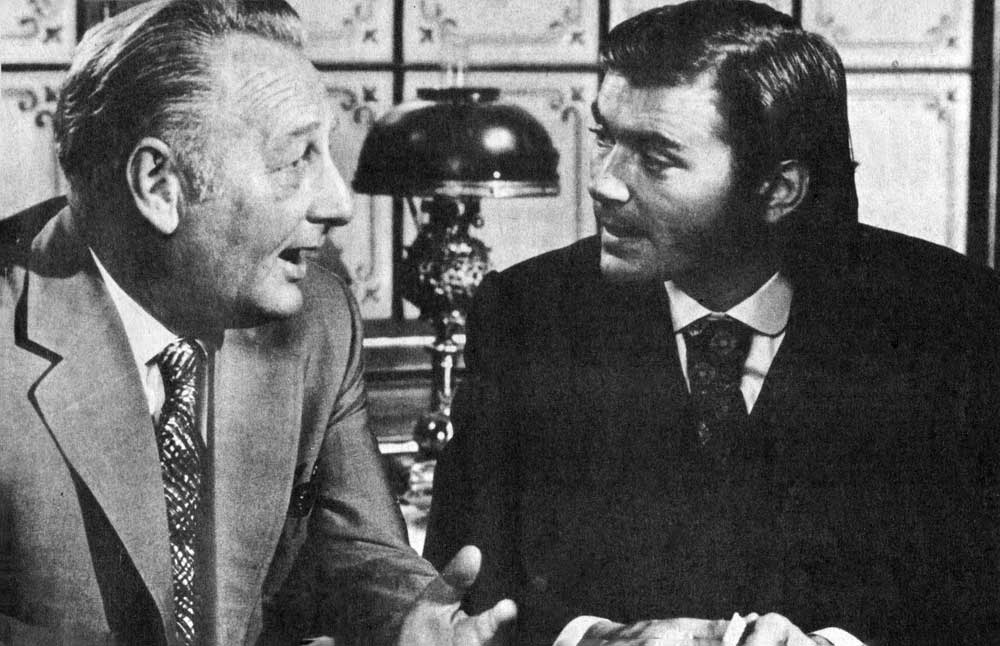 Editor’s Note: Alwyn Kurts, also known as Alwyn Kurtis, (28 October 1915 – 4 May 2000) was an Australian drama and comedy actor best remembered for his role as gruff Inspector Colin Fox in the TV series Homicide.

Kurt was holidaying on the American west coast when he paid a visit to Hollywood.

“I had arranged the visit well before I left,” said Alwyn, “and when I got there they happened to be shooting Alias Smith and Jones in the Universal Studios.

“When I arrived there was a long scene which only involved Ben Murphy, so I had a long chat with Peter Duel. He seemed normal.

“Although, in retrospect, of course, things look different. He certainly, now, seemed to be unhappy, very bitter — hurt and dejected.

“He had been signed up on a four-year contract to make Alias Smith and Jones, which suddenly was a great money-maker.

“This meant that Duel would be working hard on a hit show without a pay rise for four years. But I think he had a big chip on his shoulder and was emotionally unstable.

“I’m sure it wasn’t just the money. He obviously had a lot of other problems, too.”

Alwyn’s trip to the studio was intended to be an educational visit, to find out how the Americans did things.

“Having that talk with Duel should have been great for me,” said Alwyn, “but somehow Peter switched the questioning around and was pumping me for information about Australia. Not just about television and show business, but about life in general.

“It’s funny how you don’t notice desperation in a person until too late. But Duel, looking back on the talks, must have been a pretty desperate person.”

On that day, both Duel and Murphy insisted on taking Alwyn to lunch in the Universal canteen.

“Seeing the two of them together really showed up the different approaches to life,” said Alwyn.

“Murphy was a talkative soul, always laughing and very carefree, whereas Duel was much quieter.

“After lunch, we went back to the set and had some photographs taken, which must have been near the last publicity pictures he posed for.” 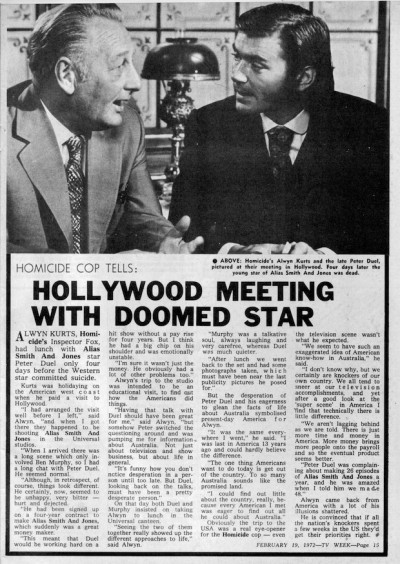 But the desperation of Peter Duel and his eagerness to glean the facts of life about Australia symbolized present-day America for Alwyn.

“It was the same everywhere I went,” he said. “I was last in America 13 years ago and could hardly believe the difference.

“The one thing Americans want to do today is get out of the country. To so many, Australia sounds like the promised land.

“I could find out little about the country, really, because every American I met was eager to find out all he could about Australia.”

Obviously, the trip to the USA was a real eye-opener for the Homicide cop — even the television scene wasn’t what he expected.

“We seem to have such an exaggerated idea of American know-how in Australia,” he said.

“I don’t know why, but we certainly are knockers of our own country. We all tend to sneer at our television accomplishments, and yet after a good look at the ‘super scene’ in America, I find that technically there is little difference.

“We aren’t lagging behind as we are told. There is just more time and money in America. More money brings more people onto the payroll and so the eventual product seems better.

“Pete Duel was complaining about making 26 episodes of Alias Smith and Jones a year, and he was amazed when I told him we made 48.”

Alwyn came back from America with a lot of his illusions shattered.

He is convinced that if all the nation’s knockers spent a few weeks in the U.S., they’d get their priorities right.

Photo Caption: “ABOVE: Homicide‘s Alwyn Kurts and the late Peter Duel, pictured at their meeting in Hollywood. Four days later, the young star of Alias Smith and Jones was dead.”