Born in 1914 in Perryville. N.Y., Dr. Deuel along with his two sisters, Catherine and Constance, was raised in Penfield from 1924 by his parents, Dr. Jacob B. Deuel — a Rochester Radiologist — and Mrs. Norma Shaut Deuel. 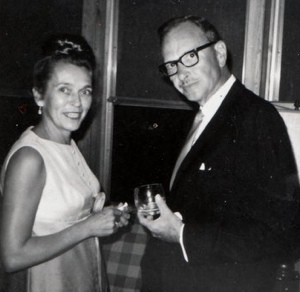 Interning at Genesee Hospital in Rochester , N.Y., Dr. Deuel was given a first child, Peter Ellstrom, by Mrs. Deuel on February 24, 1940.

Dr. Deuel returned to his hometown, establishing his family medical practice in 1944, when there was no other physician in Penfield.

After a short time on Five Mile Line Road, Dr. Deuel moved the practice and his family to 1790 Penfield Road, next to Daniel Penfield’s house. The practice was in the west wing of the house and the family referred to it as “The Office.” He had afternoon and evening office hours two times a week. Dr. Deuel also made house calls, which he usually made in the mornings and evenings. 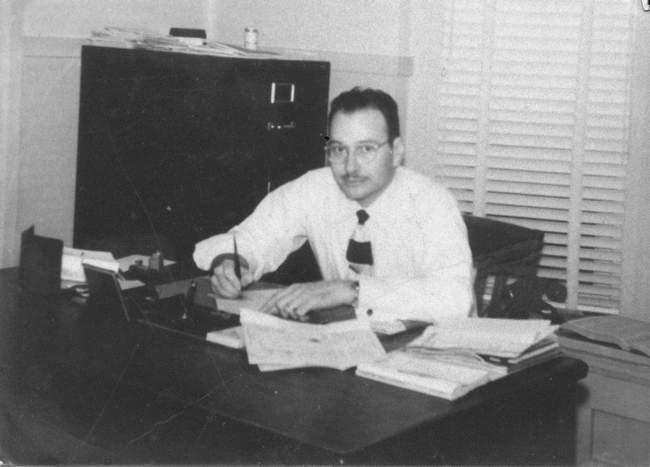 Dr. Ellsworth S. Deuel working in his office in the 1950s. (Courtesy and property of Geoffrey Deuel.)

Back then, a doctor’s private time seldom was truly private. As a general practitioner he was always on-call.

Dr. Deuel was the town’s sole physician until the mid-fifties when Dr. Kenneth Thompson set-up his practice on Five Mile Line Road.

After 23 years, Dr. Deuel closed his practice in 1967 and became a physician at Eastman Kodak. A gifted diagnostician, Dr. Deuel will be remembered for the extraordinary care he gave to his patients, as well as his no-nonsense yet compassionate manner. 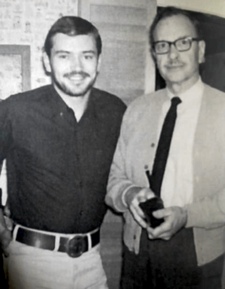 Peter with his father.

Dr. Duel’s son, Peter, died tragically at the end of 1971, and Dr. and Mrs. Deuel retired in early 1973, traveling by car and trailer to California to be closer to their remaining children, Geoffrey and Pamela, and grandchild, Jennifer.

Based in California and Arizona, Bob and Lillian traveled east in summer and fall, visiting friends and relatives and spending much of the summer at their favorite place: their cottage in Ontario, Canada.

Dr. and Mrs. Deuel moved to Prescott, Arizona, in the early 1980s. There, Lillian had a recurrence of cancer and Dr. Deuel lost his beloved wife of 48 years in March of 1986.

Bob moved to Indio, California, in 1988, where he played a lot of golf and made new friends. For more than a decade, Bob continued his peripatetic ways, summering at the cottage and visiting with Pam and Geoff/Jacqueline and other relatives and friends in Penfield and other locations. 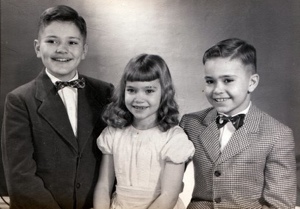 Spending holidays and going on outings with Geoff and Jacqueline as well as visiting with Pam when she came down from Philadelphia really lifted Dr. Deuel up. Bob also savored his nightly phone calls from Geoff, sharing anything that was bothering him and simply being affectionate.

Moving to the nursing home wing in the summer of 2012, Dr. Deuel was quite content until November of 2013, when he began having difficulty with a chronic bronchial cough. Despite aggressive treatment for his illness, Dr. Deuel never really recovered.

He remained lucid, however, telling his son, Geoff, on December 9: “Say goodbye, Geoff.”

He also said on more than one occasion, “I’m just so tired.”

Dr. Deuel is survived by his son, Geoffrey, and daughter-in-law, Jacqueline, of St. Petersburg, Florida; his daughter, Pamela, of Valley Forge, Pennsylvania, and his granddaughter, Jennifer, of Wisconsin.

Also his brother-in-law, Ted Ellstrom, and wife, Dawn of Webster, New York; and sister-in-law, Naomi of Altoona, Pennsylvania; as well as many cousins, a myriad of nieces and nephews and grandnieces and grandnephews and second cousins on both sides.

Thank you so much, Dad.

by Tex Maddox; Movie Life, June 1967 "Does he dare enough? That's the sure way to test any fellow! Add up all he tackles, how he proceeds, to discover what he ...
END_OF_DOCUMENT_TOKEN_TO_BE_REPLACED

as told to Marco Amedeo; Movieland and TV Time, February 1967 What makes one letter more appealing to a star than the next? This month Peter Deuel tells what catches his ...
END_OF_DOCUMENT_TOKEN_TO_BE_REPLACED

Rochester Democrat and Chronicle, June 17, 1968 "I don't see why I can't function like anyone else, if I want to, as a political activist, or as an individual who is ...
END_OF_DOCUMENT_TOKEN_TO_BE_REPLACED